Originally from Spain and raised in Miami Florida, Roberto Chamorro moved to New York City in 2001 where he began working as an assistant to Annie Leibowitz. After a short period of time, he launched his own career as a commercial photographer and has since traveled all over the world shooting campaigns for clients like Mercedes-Benz, Warner Bros Records, Univision, and LG.

Roberto’s most recent personal project, “Without Art Education,” draws from his positive experiences working in the art world and aims to bring attention to the importance of art education in the development of school-aged children.

We sat down with him to chat about the execution of the project and where he hopes to take it in the future.

To view more of Roberto’s work, visit his AtEdge portfolio and his website, robertochamorro.com 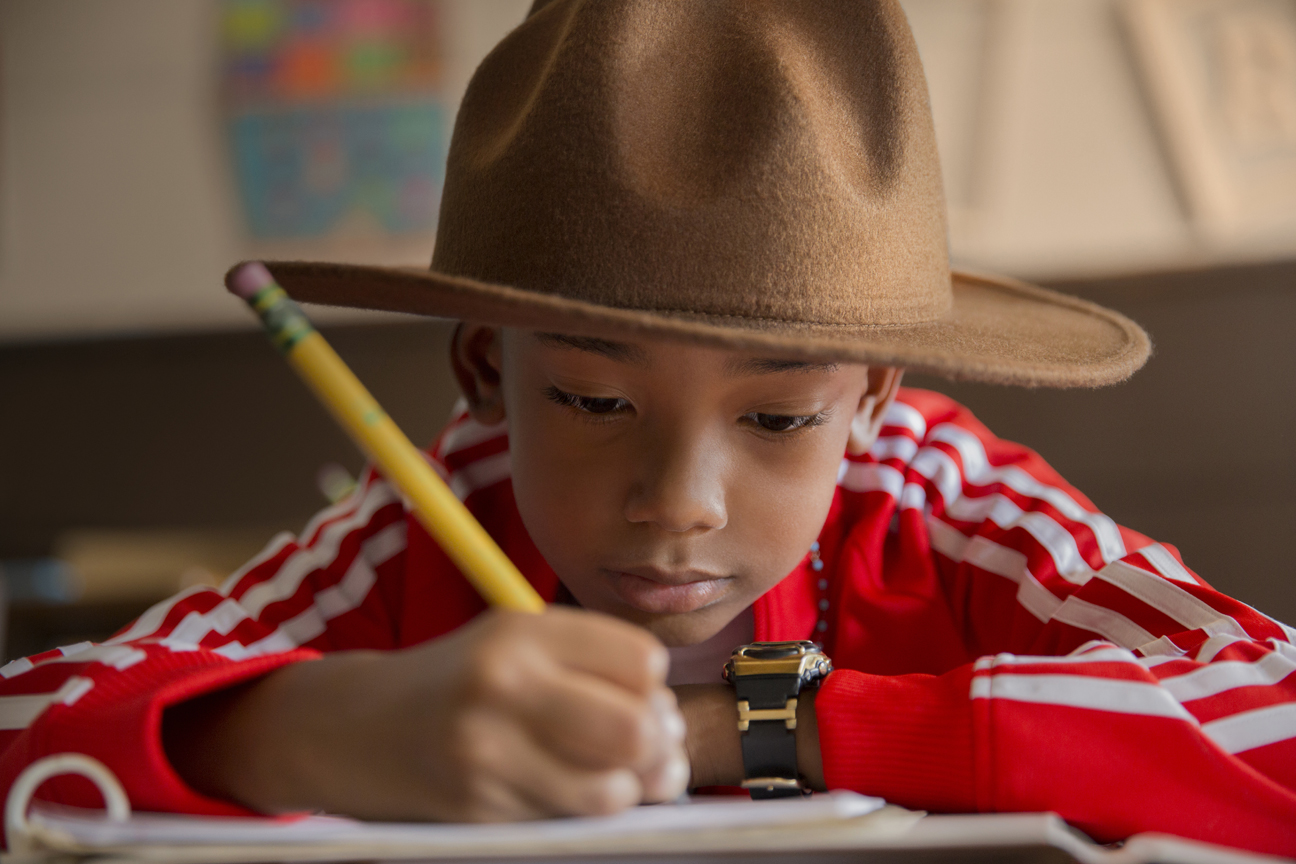 What personally motivated you to begin this project? Have you ever done anything like this before?

It began at a dinner party with a few friends. We started discussing the ongoing issue of public schools cutting art and music education due to lack of funding. Sadly, those programs are usually the first to go. We were all creative people with young kids in the school system, so it struck a nerve with us.  Just the thought of kids being denied the opportunity to be introduced and educated in the arts had me fuming. Creativity is something I’ve spent my whole life pursuing.  I have always felt lucky to have been exposed to the arts at an early stage in my life.  After that party, I spent the next few days trying to figure out how to shine a light on this topic.

Being a photographer who specializes in advertising, and with a subspecialty in shooting kids, it seemed natural to do something campaign driven. It was just a matter of hashing out a concept.

I started thinking about how different I would be if I had gone to a school that cut these programs.

This thought eventually sparked the concept of imagining who else would be different today if they had never been introduced to art and music. To be relevant and to engage with a bigger audience, I decided to portray current, well-known artists as school children. The idea being that without an early introduction to the arts, these well-known artists might not be the creative and accomplished individuals they are today. They might not have ever given the world the beautiful gifts they have bestowed upon us already. If Pharrell for example, did not follow the path he did in music, then the world might be a little less HAPPY. 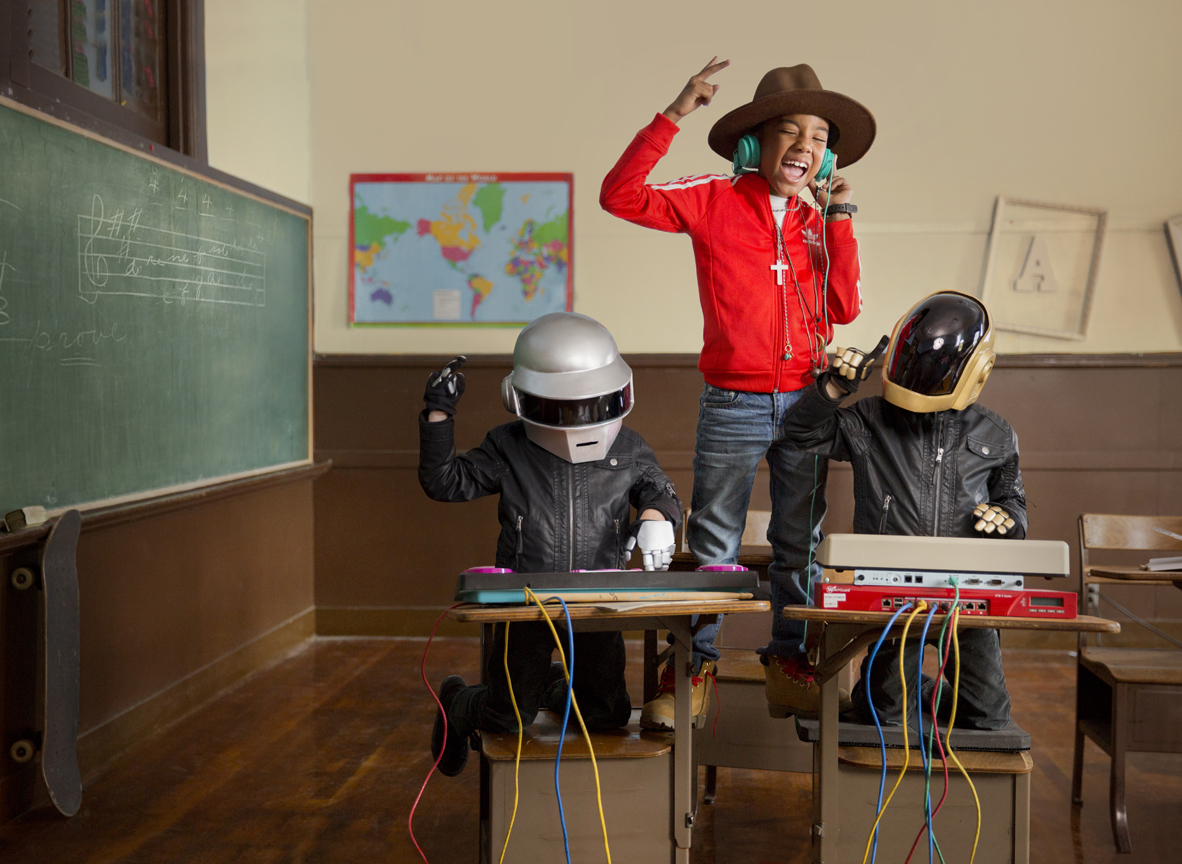 What outcome are you hoping for with this campaign?

I hope that people will see this and realize how important it is to teach our young minds about art and music. How introducing them to it at an early stage is a huge factor in a child’s development. I won’t bore you with numbers, stats, and figures, but there is a ton of data on the benefits this type of education has to our kids growing up. 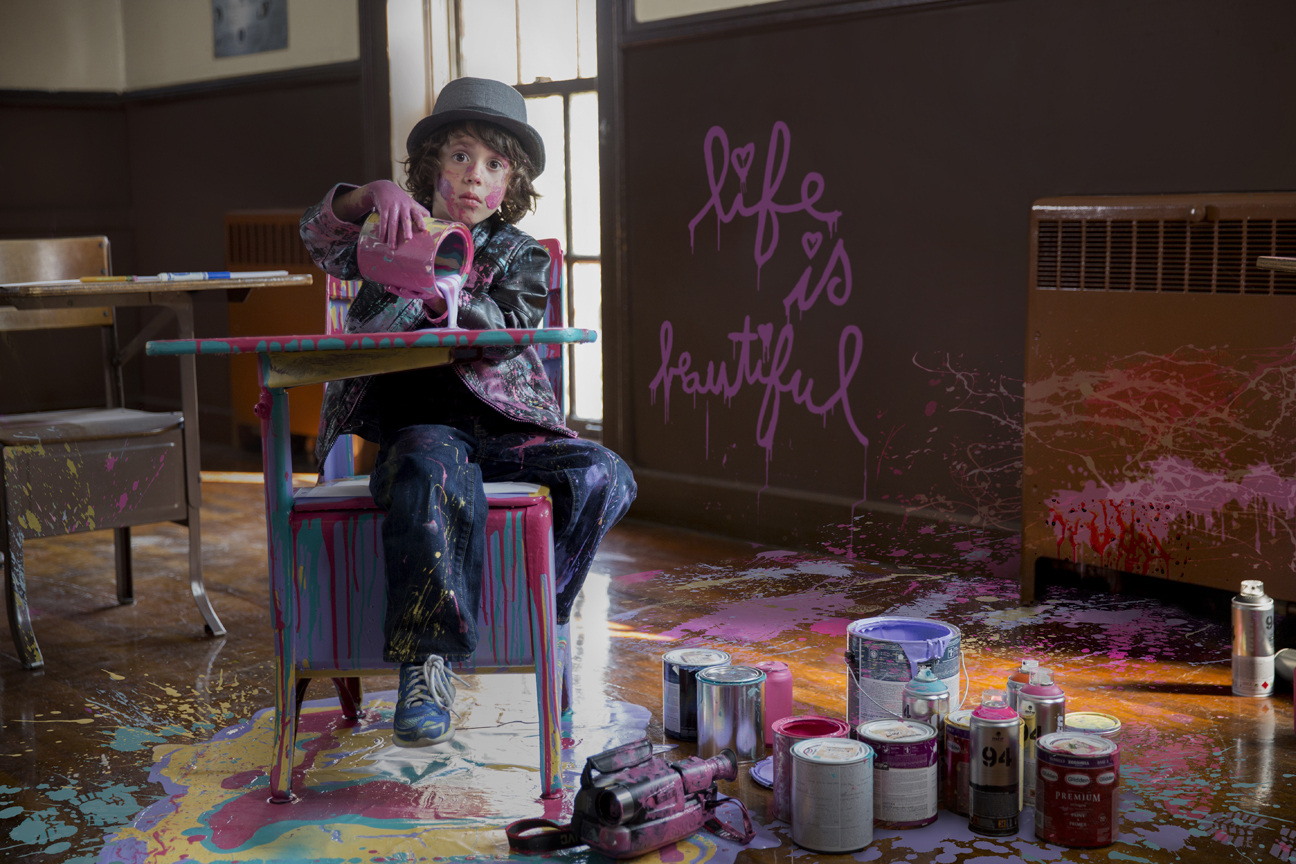 Tell us about your process while working on this project. Was it produced in-house? What challenges did you face?

Being a passion project that was self-funded, I had to produce this in-house and pull a few favors along the way. The location was tricky. I wanted a school that had character and resembled the elementary schools of my generation. Most schools these days look a bit sterile and too modern with their digital dry erase boards and technology-driven classrooms. Finally, I found the perfect school and after a few negotiations was able to secure it for our production. When it was time to cast the models, I knew that not only would they be styled in the same way as our artists’ iconic looks, but I needed them to have similar features and physically resemble the celebrities I was portraying. This was especially important for our Pharrell character, who was to be our featured hero of the shoot. After location and casting, everything else fell into place. I had an amazing team helping me every step of the way. From my usual rock star assistants and studio manager to my good friend and prop stylist Rachel Barker, who came on board to help source and custom build some of our props. 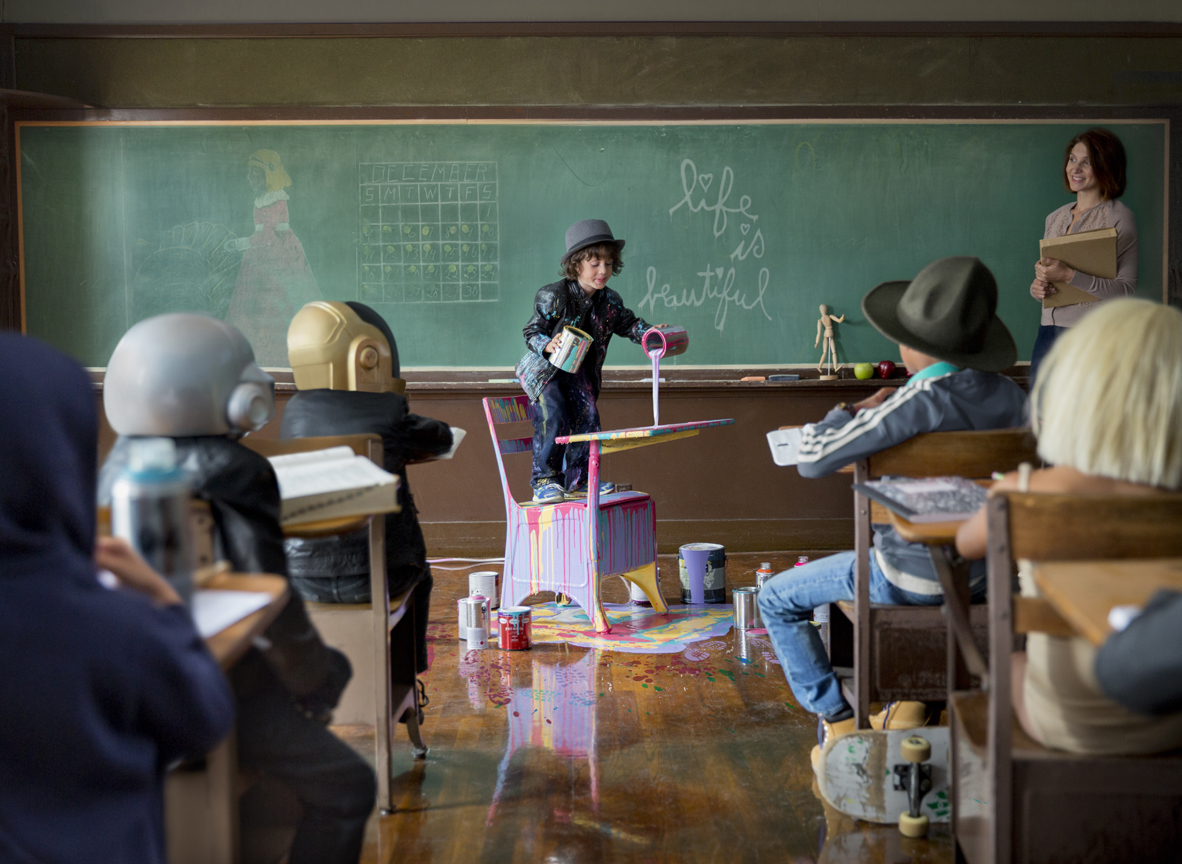 Will there be a “phase 2” for this project (i.e. plans to expand it beyond these still images)?

While the primary focus was on still photography, I wanted to take advantage of the production and also capture motion. I recruited another friend of mine, Davy Gomez and his team to come on board as my DP. We storyboarded and planned out the motion shots in pre-production so that we could capture video in between the still shots. The concept footage will be used as an intro to a longer, documentary-style film that is currently in pre-production. The doc film will focus on interviews that feature students and teachers who have faced these tough budget cuts and the elimination of creative programs. In stark contrast, we will also see the point of view from the other side, the ones that did have the education in place and the benefits they feel they have received from art and music being in their curriculum. 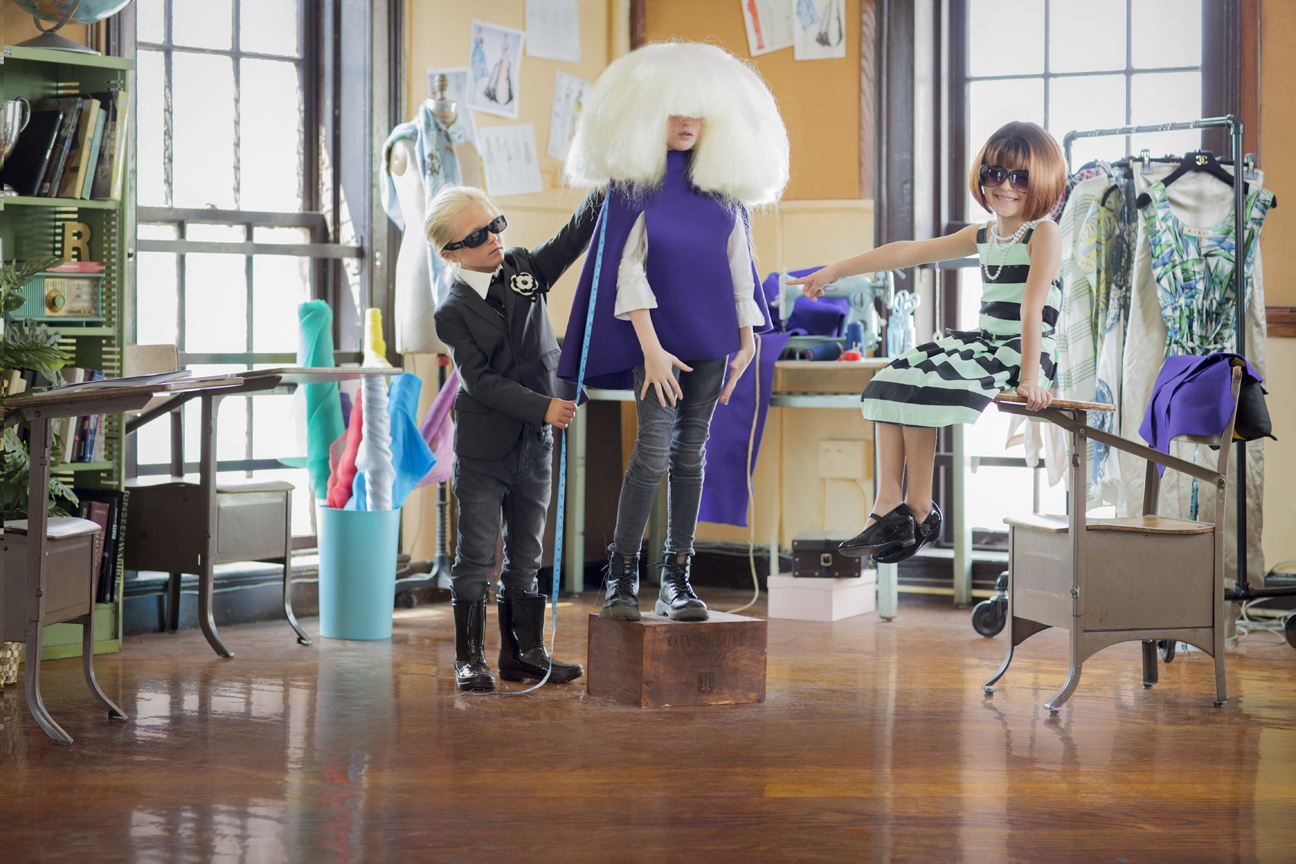 Where do you think you would be today if you had not been exposed to art and music programs in your youth?

Who knows what my career would be today if I had never been introduced to the arts?  Maybe I would have pursued business or finance as many of my childhood friends had.  Today, I can only assume that I probably would not be as happy doing that. I truly love what I do every day. Being a photographer is my dream job and I sincerely feel lucky to have a career that I very much enjoy. I honestly believe that my early exposure to art and music programs helped plant seeds that led to my creative path.